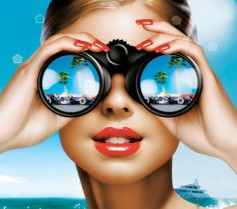 A very dear friend of mine and her boyfriend/fellow collaborator will be doing some recon around Washington DC.  I am pleased to introduce Megan and Whit, and welcome them into the Burger Recon posse.  Having attended UCLA with Megan and enjoyed many college mornings spent waiting in the drive thru line for In N Out to open, or stuffing our faces with onion rings and fries at Jerry's (Land of 1000 Sauces) I can say that I fully trust their opinions in matters of the burg.
Posted by Mallory at 10:33 AM No comments:


I recently visited this delicious place called XIV on Sunset with two lovely ladies of the night. I’m just kidding.  They’re just regular lovely ladies. The décor here is fabulous, part hunting lodge, part French baroque with an industrial tinge to it.  We had a very friendly waiter who made some wise recommendations to us, and bless his soul, he’s an actor.
We ordered several items off their fabulous menu- one of them being the KOBE BURGER.  Now, as you darling readers are well aware, I have had the sliders at XIV before, but let me tell you, they don’t do the burg justice.  This burg came out looking tall, juicy and covered in toppings: farmhouse cheddar cheese, balsamic onions, shredded lettuce and roasted tomatoes with secret sauce.  The chef was nice enough to cut in half too.  I took off the pickle and jalapeno pepper (that’s what that is, right?) and a second later Dre goes, “Are you going to eat that pickle?”  No, Dre, no I’m not.  That pickle is all yours. 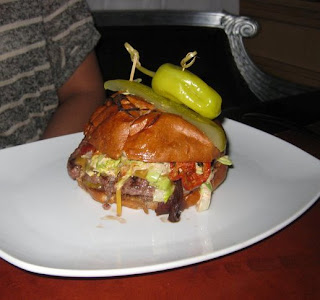 Back to the KOBE… This burger was good. It hit the spot, and then it kicked the spot, and then it grabbed the spot and gave it a nookie. I shared some of it with my lady friends, but then -rest assured- I gobbled up the whole thing. You are probably wondering if I ordered fries with this burger- I did not.  I have had their ‘trio of fries’ before and they were tasty but we wanted to branch out with something new, specifically some TRUFFLE OIL MAC AND CHEESE.  Yep, you read that correctly.  After I stuffed my face with the Kobe burg, I turned to the truffle oil mac and cheese and had my fill of that.  And by had my fill, I mean our actor friend cleared the table and I kept the mac and cheese so I could eat more of it, even though I was totally full about 5 bites into the burg. Needless to say I was so stuffed with rich foods I could hardly drink anything later at Drais.
There are several menus at XIV, and while some things are expensive, you could definitely control your cost with what you order.  They also have outside seating called the Terrace with a smaller menu that more resembles aperitivo in Italy.  Whatever your preference, go, have a burger and sample their fares.
Posted by Mallory at 10:11 AM No comments:


Last Saturday I traveled across the space-time continuum to a burger joint called The Longhorn.
With Texas cattle horns, cowboy relics, and old beer posters lining the walls, it felt like a lonely trucker’s outpost along some county line with one sweet but over-worked waitress, the usual old man watching football and bundled up men hunkered down over the bar hiding from the weather.  One dirty window let in dim light, but the wood paneling crowded it out and the steam from the grill took care of the rest. 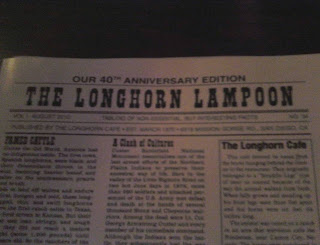 Menu’s simple enough, my brother and I split the bacon burger and added American cheese, and opted for the chili cheese fries- a dish I enjoy immensely but haven’t yet encountered on this blog.  Marie chose a bison burger with mushrooms and provolone and my Dad opted for the bacon burger with cheddar cheese.  They shared regular fries.
Fries came out first, huge portions.  Chili was good- exactly what you’d expect .  Fries were crispy, which we loved, but Marie not so much.  All the fix-ins, so to speak, rest at the end of the table so it was a mad dash for ketchup, mustard and mayo- my favorite ingredients in a sauce for fries and burgers.  Chopped onions came in their own side cup, gotta keep your options open I guess. 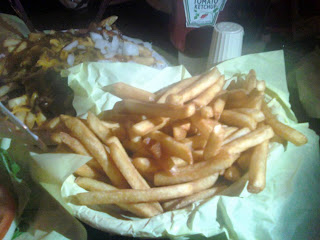 Burgers came out right after.  Open faced, toppings on the side of the plate.  Bacon was thick and crisp, our waitress was kind enough to cut the burg in half for us (You are probably wondering why I needed to share a burger, which usually is not my style: the night before we went to the Red Fox Room to celebrate my birthday and I ate a giant steak, baked potato, salad, garlic bread and carrot cake.  Needless to say, my appetite had been satiated 5 times over and retreated to recuperate!)  I instantly set about putting the delicious aforementioned sauce on my burg, a few white onion rings and the tomato slices.  I skipped the lettuce.  This was a classic American burger. The best word to describe it is dependable- hasn’t changed since the first one they made when the joint opened.  Marie wasn’t too pleased with her mushrooms- turns out they were canned, so I’d avoid them if you are a mushroom person.  But the meat was good, bacon flavorful and tableside sauce is always a plus. 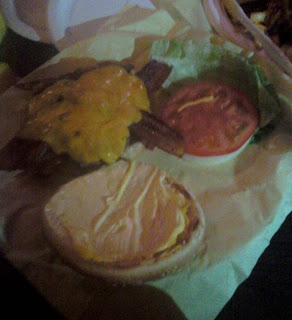 They have the usual array of fountain sodas and domestic beers. I would recommend The Longhorn to anyone looking to avoid the po-lice, to make a backroom deal of some sort, or if you want to reenact a bar fight from an 80's movie… but especially for those looking to time travel.
Posted by Mallory at 12:22 PM No comments:

Let's do some ranking.  For shits and giggles.


My friend Dallas and I made a visit to Stout the other night and I was rather impressed.  Nestled into a converted mini mall, Stout took the corner space and knocked out the walls to expand the space and provide outdoor seating.  It was buzzing with energy and the palm trees were waving overhead.  The bar curves out in a crescent shape, and bar-height runner tables curve around it, providing more ‘bar’ for the space.  The seating fans out from there into a maze of tables.  Stout’s claim to fame is that they pair beers with each burger.
We were already a little buzzed from a hilarious comedy show with Natasha Leggero & Nick Thune, but opted for some beers while we waited to be seated.  I chose a wheat beer, the Blanche de Bruxelles and it was delicious!  My love for wheat beers – and subsequent exclusion of all other beers- is growing daily.  Dallas had a Sierra Nevada Tumbler Brown Ale.  Once we were seated I took a quick look at the menu and knew I had to have the Stout burger: blue cheese, emi gruyere, rosemary bacon, caramelized onion and horseradish cream.  No adjustments necessary.  Dallas chose the Shu burger: pepper jack cheese, light bell spread, grilled avocado and chipotle sauce.  Being my defiant self, I looked at the beer paired with my burg (an IPA or barley wine) and opted out.  Dallas’ burg came with the same suggestion, but he stuck with his Sierra as well. 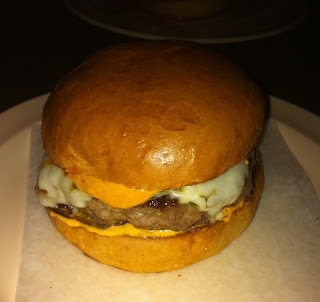 The burgers came out looking gorgeous.  Stacked tall, not too big.  Mine looked a little bloody, but wasn’t soggy at all.  I want to give them props for their buns.  They were dense which worked to our advantage in two ways.  1. They absorbed juices well and didn’t sog up.  2. With horseradish cream and pepper jack cheese/chipotle sauce, these burgs had serious kicks and the bun helped absorb the hot intensity.  That being said, the kick was fantastic.  I normally do not touch horseradish, but it complemented the flavors so well.  Even the blue cheese wasn’t over the top and it all really came together flavor-wise.  Meat was cooked medium and well seasoned.  Dallas’ Shu burger was no exception.  Definitely had a kick, but it worked.  The bacon was great, the cheese, the onion- I really loved it.  One of the best marriages of classic and gourmet styles I’ve seen yet. 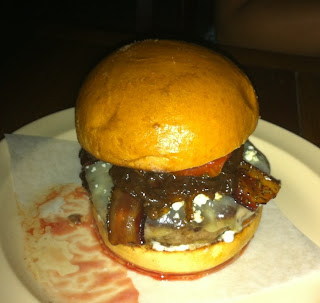 We went with the seasoned fries, and there were several dip options so we asked our waitress which to choose.  She recommended the chipotle.  After sampling it, for me, it wasn’t the right choice.  Because the burgers have a nice spice to them, I needed the fries and their dip to be a calming presence- a flavor different from the burgers and the beers.  Thus, I asked for the lemon basil aioli and it was definitely the right choice.  Father’s Office has the best aioli, but this was perfect for the occasion.  The fries were crisp and delicious.  I saw sweet potato chips at another table, so I put those on my list for next time.  One serving of fries could easily feed three people. 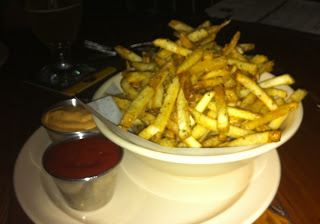 It's got a finished industrial feel to it.  Copper around the bar, wood paneling and concrete elsewhere.  There's a fantastic beer bottle chandelier too.  Their beer menu is extensive and service was ok, not great.  If you’re in Hollywood, hit this place up.  I can’t wait to go back and try another burger!
Posted by Mallory at 12:13 PM No comments: